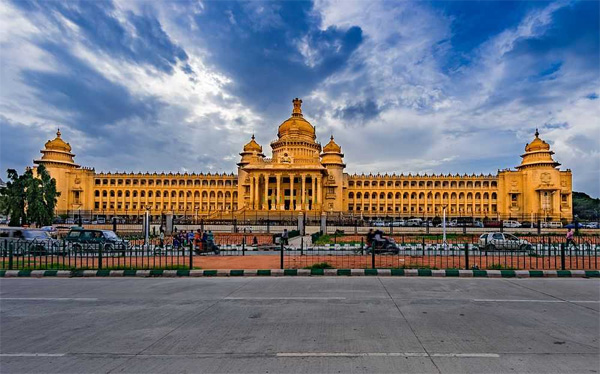 Arrive into Bengaluru, the garden city formerly known as Bangalore ,meet and transfer to hotel for 01 night stay. Bengaluru is known for its numerous parks and avenues. Afternoon, sightseeing tour of Bangalore including Tipu Sultan's Palace, Bull Temple, Lalbagh Gardens, Cubbon Park & Museum and Vidhana Soudha -which houses both the State Legislature and Secretariat. Overnight stay at Bangalore. Visit the Kappad beach where Vasco d agama set foot in 1498 which was the discovery of sea route to kerala. Also if time permits visit the beypore one of the prominent ports and fishing harbours, and was also an important trade and maritime centre during the days of the early Arab and Chinese travelers and later the Europeans. Soon after gaining prominence as a port and trade centre, Beypore slowly began to flourish as a centre for shipbuilding, since ships were 0in great demand merchants from Western Asia. The shipbuilding yard at Beypore is famous for its traditional construction of the Uru or the Arabian trading vessel. This tradition of shipbuilding is nearly 1,500 years old, and the craftsmanship of the workers here is exceptional. Overnight at Calicut.

Day 2 TO HASSAN via SRAVANABELAGOLA (180 KMS)

After a leisurely breakfast proceed to Hassan a pleasant, picturesque town in the heart of Malnad. En route, visit Shravanabelagola. This was the legendary pilgrim centre and shrine of the Jains since early times. Afternoon, visit Belur and Halebid. Belur, 34 km from Hassan is also known as the Dakshina ( southern) Varanasi.The serenity of Belur is attributed to the celebrated temple of Chennakeshava, belonging to 1117 AD. Halebid has several strikingly beautiful Hoysala temples and Jain shrines. Overnight stay at Hassan.

After breakfast, proceed to Mysore, the capital of a former princely state, Mysore is a city of palaces and gardens and is famous for its silk, sandalwood and jasmine. With many grand palaces like Mysore Palace adorning the face of the city, Mysore has come to be known as 'City of Palaces'. The name Mysore has its roots in Indian mythology. The legend has it that Goddess Chamundi killed Demon Mahishasura here. Thus the name Mysore. The city was once the capital of Wodeyar Dynasty till IndependenceEn route, visit Srirangapatna, around 15 Km from Mysore, a city surrounded by River Kaveri form all sides. The town gets its name from the famous Temple Ranganathaswamy Temple that dominates the landscape of the town. Srirangapatna once served as the capital of Mysore during the reign of Hyder Ali and Tipu Sultan. The latter built Srirangapatna as his fortress.

After breakfast checkout from hotel and drive to Coorg enroute visiting the Tibetan Budhist settlement at Bylakuppe, Golden Temple is the main tourist attraction in Bylakuppe. Stepping inside the temple feels like walking into another world, and the noisy streets of South India suddenly seem to be very far away. Three beautiful golden Buddha statues each of 40 Feet namely Padmasambhava, Buddha and Amitayus look down at visitors above the altar.
Coorg Situated in the southwestern part of Karnataka, perched on the Western Ghats at an altitude of 1100 m above sea level. Dotted with beautiful coffee and tea plantations, alluring nature trails and splendid waterfalls, it's a place good enough to be visited again and again. Nestling at a height, the climate in Coorg throughout the year is perfect. The most magical place in Coorg is Madikeri which is also referred to as 'Scotland of India'. Upon arrival check in to your resort. Overnight at Coorg.

Day free to relax at Coorg. You may take a tour of the sprawling plantations around or proceed for a soft trek. Overnight at Coorg.

After breakfast drive to Kabani, Nestled in the southern fringes of the Nagarahole National Park, the Kabini River Lodge is a perfect getaway for nature lovers. The breathtaking locale with the tranquil backwaters of the River Kabini presents an ideal setting for a long-awaited vacation. Once the hunting lodge of the erstwhile Maharaja Gaur, Chital, Sambar and Barking Deer, Sloth Bears and Langur. Crocodiles and over a hundred species of birds and the elusive Cats, the Leopard and Tiger. Reach in time for lunch and later proceed for a jungle safari to see the wildlife. Overnight at Kabini.

fter breakfast drive to Wayanad, Upon arrival check in to your resort. Wayanad located in the north east of Kerala state and the most sought after tourist destination in Asia. Kerala the terrain of immense natural beauty is pertinently known as the "ecstasy of travelers". From the imposing heights of the Western Ghats the country swells westward presenting a panorama of silent valleys clothed in the richest green. Kerala - is the land of Rivers and backwaters, hundred percent literacy, peaceful and pristine, one of India's cleanest state.
Later Visit to Edakkal Caves considered to be one of the earliest centres of human habitation. Inside the cave you will find ancient stone scripts, pictorial wall inscriptions of human and animal figures with peculiar headdresses, the swastik form, symbols and cave drawings of human figures, wheels, bows, knives, trees and so on. Overnight at the resort in Wayanad.

After breakfast check out and drive to Guruvayur a small town situated around 24 km fromThrissur. It derives its name from the ancient Guruvayur temple dedicated to Lord Krishna and one of the most important temples of south India. A famous pilgrimage and cultural centre. Non Hindus are not allowed inside the temple. Upon arrival, check in to your hotel. Overnight at Guruvayur.

After an early breakfast, check out and proceed to visit the famous Elephant Sanctuary (Punnathur kotta) near the Guruvayur temple. It houses more than 60 elephants. All these elephants were offerings to the deity and are used for temple purposes. Proceed to Cochin, the financial capital and the most cosmopolitan city of Kerala. Check in to your hotel at Cochin. By evening witness the world famous Kathakali dance at a local theatre, a traditional art form of kerala and one among the national dances of India. Overnight at hotel in Cochin.

After breakfast proceed for a sightseeing tour of Cochin covering - The Dutch Palace at Mattancherry is renowned for its wall murals depicting scenes from the Ramayana. The Jewish Synagogue at the heart of what is locally called the Jew Town. The St. Francis Church, the oldest European church in India. The Santa Cruz Basilica originally built in 1557 by the Portuguese. The Chinese fishing nets are huge cantilevered fishing nets believed to have brought to Kochi by Chinese trade. Venture into the busy markets of Cochin for a shopping experience, an ideal place to find curios, souveniers, spices, textiles etc. Overnight at Cochin.

In time departure transfer to the Cochin Airport (1 hour drive) assisted by our representative.